This is one data recovery case study for one Dolphin Indian user by Dolphin remote support system. Users can learn how to use Dolphin hdd repair and data recovery tools to fix the firmware corruption and recover lost data.

This was one undetected USB hard drive of PCB 1961, the drive has some slight clicking noises and not detected at all. The user converted to compatible SATA PCB and transferred the ROM chip from USB PCB to SATA PCB.

Next user entered DFL WD firmware repair program, backup the ROM. At this time, no firmware modules are available and the hdd spin up and down.

One click to bypass SA reading and power off and on, the hdd spins up and didn’t spin down. Entering the WD firmware repair program, the firmware modules were available. The user backup all firmware modules. Next users can use DFL-WD to load all loaders automatically, next the user tested all firmware modules and all were ok, the user fixed the slow initialization problem, wrote back original rom, the hdd kept the same failure, spin up and down and undetected.

Next Dolphin support engineer tested the firmware modules deeply by checking the hex values and found out something wrong with the tracks list. The engineer cleared the track list, powered off and on and wrote back original rom, the hdd became detected and the data area was accessible. The only issue was that the hdd’s head 0 was weak and there’re some bad sectors in the front. 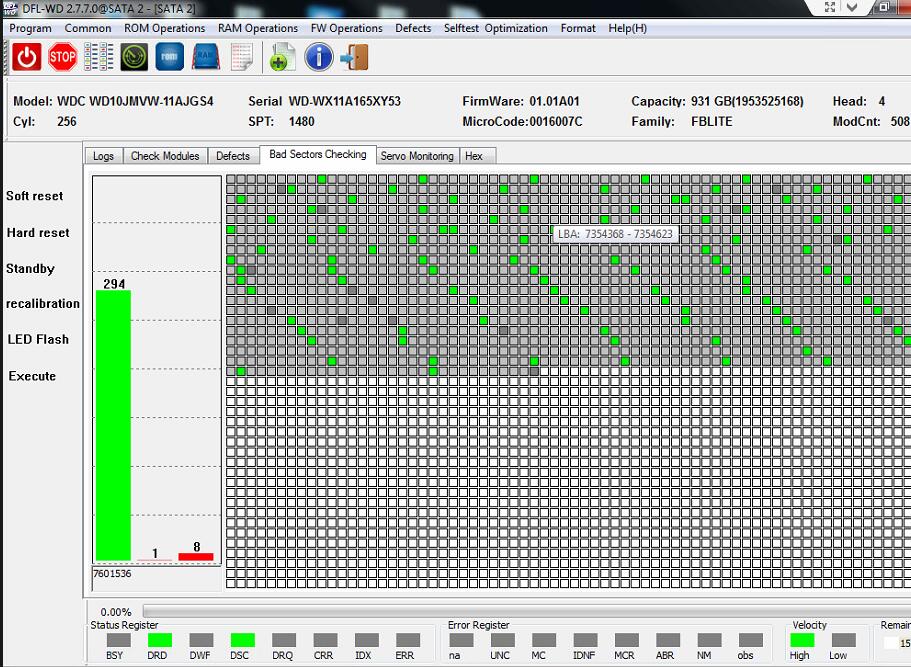 At this time, the user can use selective head image to image good heads first and image backward, from max LBA to min LBA, this way, the user got most of the data, if good luck, all data without head swap, because most data in the front LBAs are system data which was not important.

Any question is welcome to sales@dolphindatalab.com or add Dolphin Skype ID: dolphin.data.lab